Last Friday I went to Ishikawa Prefecture.  My wife stays at my house in Ishikawa because she has to take care of her sister.  She has cancer.  Her My sister-in-law  lives with her daughter, but she is too young to take care of her mother.  She is only 11 years old.  She knows nothing.   So my wife takes care of them until her sister becomes healthy.

The house has a lot of problems.  Curtain has broken.  Curtain rails have broken.  Water facet has rusted.  In the kitchen, the sink has also problems.  Water leakage.  I need to contact a plumber.  I ask the plumber to fix the pipe.

Two days later we went to Kanazawa Castle, to be exact, the remains of Kanazawa Castle.  There remains only an entrance gate and the leading bridge. Actually it was a quiet atmosphere.  We can imagine how prosperous this city and castle was.  So many warriors and merchants were active in keeping this city going. 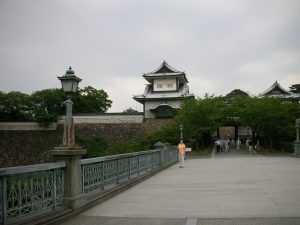